Filesystem in User SpacE (FUSE) is a software interface for developing file systems in user-mode without complexity of kernel interface programming.  Crossmeta FUSE provides the same reference Linux FUSE API, so that programs can be ported with no or very little modifications.  While it maintains the same API interface it does not inherit the limitations of  transfer size and concurrent writes.  It provides the following two components 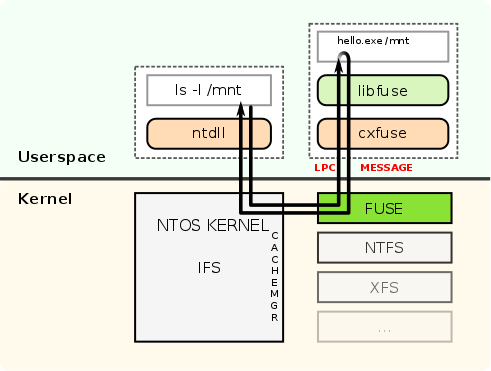 A flow-chart diagram showing how FUSE works: Request from userspace to list files (ls -l /mnt) gets redirected by the Kernel through NTIFS to FUSE. FUSE then contacts the registered handler program (./hello) and passes file systems requests as LPC messages. The handler program returns a response back to FUSE as LPC reply which is then redirected to the userspace program that originally made the request.

The high-level API that is primarily specified in fuse.h.

The low-level API that is primarily documented in fuse_lowlevel.h. You don’t have to learn any new API in Crossmeta FUSE as a true port of Linux FUSE 2.6